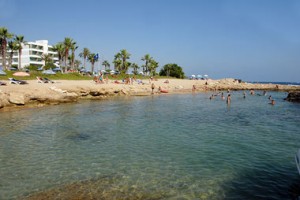 Pachyammos Beach – Blue Flag
Pachyammos Bay has a narrow sandy beach with a very few rocks.
It is situated in the Pafos (Paphos) tourist area, in front of the hotels by Poseidonos Avenue.
Well signposted, the beach is accessible by bus, car, motorbike and bicycle.
From June 1st to October 15th, water sports, sun beds and umbrellas are on hire on site.
Accommodation facilities, bars, restaurants and telephones are also available nearby.
The quality of the water is tested frequently and the beachfront is cleaned every day.
Lifeguards are on duty with lifesaving equipment from 11:00 to 17:30 hours during the bathing season.

Coral Bay
Coral Bay is famed for having one of the most beautiful sandy beaches on the island, and with its sparkling clear waters, safe swimming and sport facilities, it’s not surprising that it’s a favourite with tourists and locals alike.
Close by you can find shops, supermarkets, and also restaurants and taverns which serve fresh fish and Cyprus delicacies. 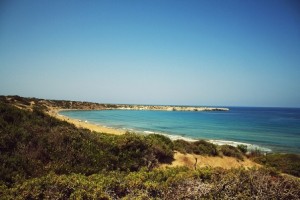 Lara Bay
Lara Bay is a beautiful remote area with one of the best beaches on the island although the dirt track is quite poor, and it’s advisable to go with a jeep type vehicle, it’s worth it because here some of the finest scenery on the island can be found.
Famed for its turtle hatchery where loggerhead and greenback turtles lay their eggs, one of the few places in the Mediterranean where they can still be found, Lara Bay is also home to the Mediterranean monk seal, another very rare species.
Beyond the turtle hatchery, the most beautiful beaches with white sand and clear waters can be found, but the water can suddenly get deep and wavy, so swimmers should be careful.
The ideal way to reach the beautiful bay is to get a boat from Paphos to Lara Bay so visitors avoid the difficult and time-consuming road trip. 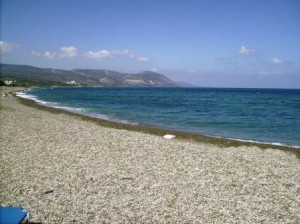 Latchi Beach
Latchi is a small fishing village located on the northern coast of the island. Before becoming known as a tourist area, it was a sponge diving area, until sponge supplies run out.
On Latchi’s pebble beach many tourists and locals alike get their suntan and enjoy a swim but swimmers should be careful because the water suddenly deepens, which is perfect for the water sports and scuba diving that are very popular in the area.
There are many coffee shops and traditional little tavernas that specialise in seafood close to the beach. 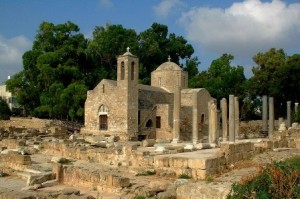 Ayia Solomoni Church
Originally this church was a Christian catacomb in the 9th century it was converted into a Christian chapel and by the 12th century was decorated with frescos.
At the entrance of the catacomb stands a sacred tree and according to tradition it cures the disease of those who hang a personal offering on its branches. 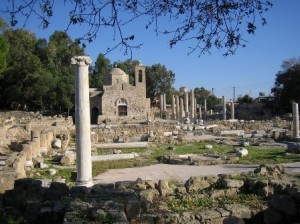 Panayia Chrysopolitissa Church
The church of Panayia Chrysopolitissa was built in the 13th century over the ruins of the largest Byzantine basilica on the island.
From the compound you can see St Paul’s Pillar, where it’s said that Saint Paul was flogged at some time before Roman Governor Sergius Paulus converted to Christianity. 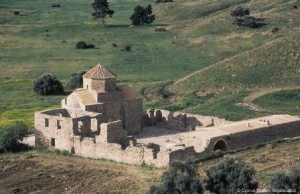 Panagia tou Sinti Monastery – Pentalia, Paphos
It is an abandoned monastery on the banks of the Xeros River.
The central nave of the monastery, dating to the 16th century is in good condition and is considered one of the most important buildings of the Venetian period.
In 1977 it received the Europa Nostra award for the restoration and conservation work carried out on it. 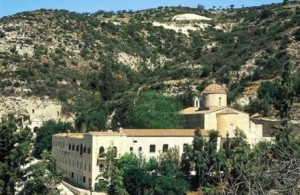 Ayios Neophytos Monastery (5.5 miles) north of Paphos
It was founded at the end of the 12th century by the Cypriot hermit and writer Neophytos.
The Egkleistra, an enclosure carved out of the mountain by the hermit, contains some of the finest Byzantine frescoes dating from the 12th to 15th century.
In the monastery church which contains some of the most beautiful icons of the Post-Byzantine period of the 16th century is a very interesting ecclesiastical museum.